Recently, I was in the midst of a season of worship and praise, on my knees, pouring out my gratitude for the many blessings God has bestowed.  Tears flowed as my thanksgiving lifted to the throne of grace, and all at once I heard His gentle, still, small voice say, “Child, your obedience unlocked the blessing.”  I began to carefully ponder His words, and my mind went back to the many things that have changed in our lives over the past few years.  Each of those changes was a direct result of our obedience to His call—each one of those changes was in direct response to what He told us to do.  It has all been “for His name’s sake.”  Not one, single change has been easy.  Every one of them has required a level of self-denial that I didn’t know existed.  It has taken a complete, wholehearted surrender to God, and our decisions have not always been understood.  What I am finding is that following Jesus has always seemed radical to those who are not taking the same path, and His approval immeasurably outweighs the acceptance and applause of man.

As time goes by, and we are continually amazed at His—not scant, but abundant provision, the enemy has been planting seeds of doubt in my mind concerning the continuance of God’s blessing upon our lives.  I keep wondering when the bottom will fall out and fearing that God’s resources will run out and concerned that we will fall into a state of lack and insufficiency.  During all this doubting, God led Kevin, Zach, and me to start studying the books of Exodus, Deuteronomy, and Joshua as material for our times of family worship.  Since the very beginning of these radical life changes, God has always reckoned our journey to that of the children of Israel’s deliverance from the bondage of Egypt, crossing the Red Sea, their wilderness experience, crossing the Jordan River over into the Promised Land, etc., but He showed us to dig deep and really delve into the details of their story to find the particulars of the parallels between their experiences and ours.  It turns out there are many.  We have finished Exodus and are now digging into Deuteronomy, and it has been downright amazing to see such marked similarities.  There have been many moments when our hands have raised and our tears freely flowed as He highlighted our journey through the reading of theirs, and we worshiped Him for the mighty works He has wrought right here in our lives.

As we have studied and pondered these similarities, God has been showing me that as long as the Israelites were obedient to Him, He rewarded that obedience with blessing.  Once they made it to the Promised Land of Canaan and continued to walk in obedience, they never felt lack again.  No longer did they have to feel the sting from the cruel hand of their taskmasters across their backs or experience meager provision.  God became their Provider, and His provisions never ran out!  When they were thirsty and there was no water, He made it flow from a rock.  When they were hungry, and they had no food, He sent manna from Heaven and quails for them to eat.  When they faced enemies, He fought and victoriously won their battles, without them having to lift a finger or “fire a shot.”  When they needed direction, He led them by a pillar of fire by night and a cloud by day, and later, as they followed 2000 cubits behind the Ark of the Covenant.  Miracle after miracle after miracle He performed on their behalf, and He never ran out of resources.  The only thing they had to do to keep unlocking and unleashing God’s miraculous, overwhelming blessings was to walk in total, unreserved obedience.  As long as they did that, the blessings unceasingly flowed.

As God has pointed this out to me, He is sending assurance that He has not changed.  He is still the same God whom they served, and if we serve Him wholeheartedly and do every, single thing He asks, regardless how it defies human wisdom and how counter-cultural it may be, we will get the same, exact results they did.

His arm is still not shortened.

There is still nothing too hard for Him to do.

“Behold, I am the LORD, the God of all flesh: is there anything too hard for Me?”

All these years later, not one word of His promises has ever failed.

“Blessed be the LORD, that hath given rest unto his people Israel, according to all that he promised: there hath not failed one word of all his good promise, which he promised by the hand of Moses his servant.”  I Kings 8:56

We don’t have to look back to Bible days to see the mighty hand of God at work.  If we want to see Him move in ways that are “exceeding abundantly above all we can ask or think,” all we have to do is lay our lives on the altar as a living sacrifice and be willing to do ALL that He asks, no matter what that happens to be.  Obedience will unlock His blessing in ways that are so far above what we can ask or imagine, and as long as we continue to walk in that same level of obedience, the blessings will never cease to flow. 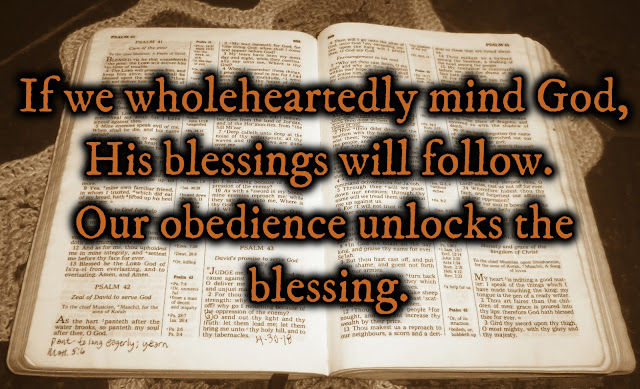