“For we have not a high priest which cannot be touched with the feeling of our infirmities; but was in all points tempted like as we are, yet without sin.  Let us, therefore, come boldly unto the throne of grace, that we may obtain mercy, and find grace to help in time of need.”  Hebrews 4:15,16 (KJV)

Have you ever felt like your prayers have turned into more of a broken-record chant?
Have you prayed for something for so long that you fear God may be tired of hearing your voice?
Instead of feeling the liberty to “come boldly to the throne of grace,” do you approach God with trepidation and hesitancy?
Perhaps you feel like you are interrupting God from something or someone more important than you?
Do you feel like the ugliness of your sin is too much for God to handle?
Does shame hold you back from approaching Him in your current state?

I want to share a story that you are very familiar with as a reminder of the way God sees you and the things that touch your life.

A man in authority who was a ruler of the synagogue, named Jairus, came to Jesus and fell down at His feet.  The Bible says Jairus “besought” Jesus, which means He was pleading with Him to come to His house to heal his little twelve-year-old daughter who was dying.  As Jesus made His way toward Jairus’ house, the people thronged Him.  And, right into the midst of this situation came one of the biggest interruptions recorded in the Bible.

In the crowd of people who were thronging Jesus was a woman who had been suffering for a very long time.  Hers was no insignificant sickness.  She had been plagued with “an issue of blood” for twelve, long, agonizing years.  Women in this condition were considered “unclean.”  If they touched someone, that person would then also be considered ceremonially unclean and would have to follow certain remedial guidelines to be considered clean again.  (Read Leviticus chapters 12 and 15 for a detailed explanation.)  The shame that was attached to this woman was debilitating and beyond humiliating.  Imagine trying to live life in her condition for twelve years, with no reprieve.  It is incomprehensible to think of the suffering and torment she had endured, but even worse, just think of the isolation she must have felt.

Through the years of her condition, she had spent everything she had going to doctors, trying to find relief.  It was all to no avail.  Instead of getting better, she continued to get worse.

I imagine it took everything she had to fight her way through the crowd and make it to Jesus that day.  Who knows what distance she had to travel or what she went through to get there.  Undoubtedly, she was extremely weak from prolonged loss of blood.  Not to mention, trying not to physically touch anyone in such a tight-packed mob.   And, let’s not forget the disdained reaction of others that accompanied such stigma.  I can just picture her making her way through that thick mass of people, more than likely stooped over or possibly even on her hands and knees—trying not to be noticed, holding her breath for fear she would be discovered, scorned, and openly disgraced.

This was her last chance for help.  Jesus was her one and only hope.  Nothing else had worked.  The fact that she openly pressed her way through such a multitude surely proves the desperation of her state.  No matter the cost, she had to try—she had to do her best to make contact.

At last, she made it.  There He was—standing right in front of her.  Close enough to touch.

But, no!  She must not touch Him!  She must come as close as she could without making physical contact!  So, she reached down—to the lowest part of His clothes—the very hem of His garment.  Was it enough?  She didn’t have to wonder for long, for in less than a split second—immediately—her bleeding stopped!  She was HEALED!  Overwhelming relief was instantly replaced by the worst fear she had ever experienced when she heard Him speak.

It must have felt like time stood completely still for space of an eternity as the weight of His words settled over her anguished mind.

She waited, with baited breath, as everyone around her said, “It wasn’t me,” and Peter and His other followers said in astonishment, “Master, the multitude is thronging You and You are asking us who touched You?”

But, Jesus knew this had been no casual brushing of garments.

“And Jesus said, Somebody hath touched Me: for I perceive that virtue is gone out of Me.”  (verse 46)

Oh, that touch!  It was different from all the others.

Realizing she had been found out, the woman “came trembling and falling down before Him, she declared unto Him before all the people for what cause she had touched Him, and how she was healed immediately.”  (verse 47)

Before all the people—she had to stand there, not knowing what would happen to her for such bold presumption and audaciousness, and not only confess to Jesus in front of them all that she had touched Him, but she also told Him why.

She faced her fears, and regardless what the repercussions turned out to be, she fell at Jesus’ feet and openly testified before all of the magnitude of what He had done for her.

Can you just picture the look on Jesus’ face?  The compassion in His eyes?  The wall of stigma crashing to the earth around her?

I can just see the tenderness, the gentleness, the kindness, as He said unto her,  “Daughter, be of good comfort: thy faith hath made thee whole; go in peace.”

Daughter!  He had called her daughter!  No more an outcast!  No more a reject!  He had literally set her completely free from not only the horrors of her disease, but from a life of bondage, fear, separation, loneliness, and despair.

He told her to “go in peace.”  There was no reproof for what she had done.  Things were meant to happen the way they did.  What seemed an interruption to Jesus’ plans was actually Divine appointment.  That glorious day, faith met virtue, and a miracle was granted to the one who sought Him so desperately.

This was just one account of the times Jesus was interrupted on His way to minister to someone else. He never made the person who was interrupting Him feel less important than the person He was on His way to see.  At the end of the day, He knew His Father’s will would be done, and His goodness would not spoil, no matter how long it took for Him to get there.

Think of Lazarus.  (John 11:1-44)  Jesus was in no hurry to get to him because He knew that even death was no match for His power.  It didn’t matter how long it took Him to get there, the end result would be the same.  Lazarus would be raised from the dead, and he would live again, no matter how far gone he was!

No matter what you are going through, no matter how many times you have come to Him, begging Him for the answer you so desperately need, you never become a bother to Him.  He can take whatever you bring to Him.  You, my friend, are important enough to Him that He is continually listening for your prayers.  “For the eyes of the Lord are over the righteous, and His ears are open unto their prayers.”  I Peter 3:12  He loves to hear you pray.  He longs for you to reach out to Him from your place of desperation.

Regardless how dark the stain of your sin or how much the world looks down upon you for the condition you are in, Jesus never feels repulsed.  You are never too much for Him to take.  You can touch Him at any time.  Nothing you have done will ever cause Him to turn away.  He loves you so much!

Keep pressing your way through whatever you have to in order to get to Him.  Step forward in faith and touch the hem of His garment.  He has everything you need.  All you have to do is to come to Him.

“All that the Father giveth Me shall come to Me; and him that cometh to Me I will in no wise cast out.”  John 6:37

“Come unto Me, all ye that labor and are heavy laden, and I will give you rest.  Take My yoke upon you, and learn of Me; for I am meek and lowly in heart: and ye shall find rest unto your souls.  For My yoke is easy, and My burden is light.”  Matthew 11:28-30

Be encouraged, and know that there is hope for you.

It is found in the same One Who called the shamed woman “Daughter.”

He loves you every bit as much as He loved her.

His compassion for you is every bit as strong.

Come as you are, and trust His heart.

Come to Him now, and be made completely whole. 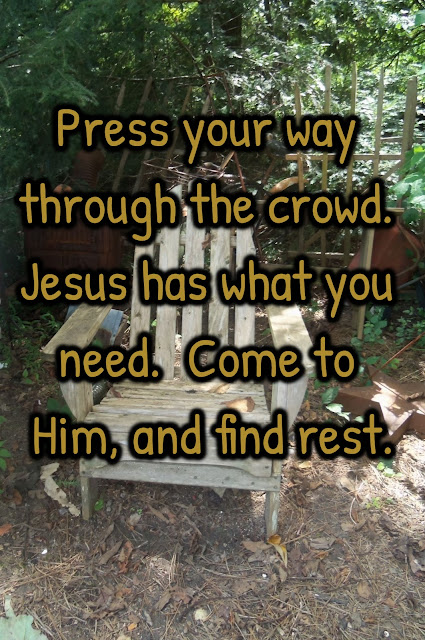